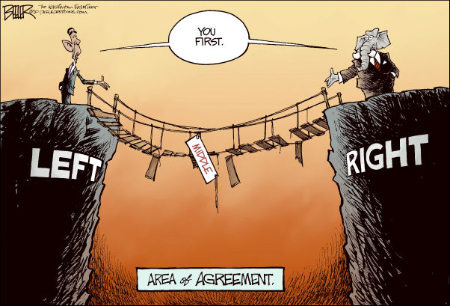 Synopsis: When people speak of ‘living by your principles’, it sounds all too fluffy and intangible. It is something you might expect in a sermon or from a yoga-loving hippie. However, over the past few years, I have tried to understand what my ‘core beliefs’ or ‘principles’ and live by them. This post focuses on my attempts to live by them, my failures and the virtues of being a ‘principled hypocrite’.

Disclaimer: I have realised blogging is quite hard, particularly when conveying thoughts as opposed to travelling experiences – apologies if this does not read clearly, any comments/advice would be much appreciated and hopefully, with practice, I shall be more succinct!

To facilitate a clear discussion, I will define both terms:

Principles – core beliefs which you ascribe to and shape your decisions i.e the thing in your head that tells the way in which you would like to achieve something, not how

Hypocrisy – professing beliefs which one’s own behaviour does not conform to, i.e a pacifist initiating a fist brawl

The seduction of a ‘Randian’ World

Living up to one’s principles was a virtue I was captivated by after reading two Ayn Rand books, The Fountainhead and Atlas Shrugged. In these, she staunchly advocated remaining unflinchingly to your principles as the key to human creativity, success and achievement. Her protagonists, Howard Roark and Hank Rearden, are examples of people who live completely by their principles of ‘following the pursuits of their mind’: treating human reasoning, ability and individualism of utmost importance. When confronted with great opportunities for fame, fortune and success which demand the slightest compromise of their ideals – they never falter. In her books, they more often gain infamy than fame from society for their unwillingness to cower to the views of others. However, in so doing they are able to achieve things of meaning and substance.

By contrast, antagonists like Peter Keating or James Taggart, highlight all that is wrong with the world. Willing to make concessions on their principles, they acquire fame but remain unfulfilled. Ironically, in the pursuit of what they thought would lead to happiness, they gave up the path to achieving it. As she writes: “There are two sides to every issue: one side is right and the other is wrong, but the middle is always evil.” 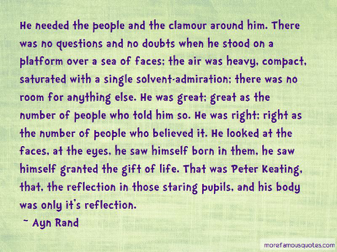 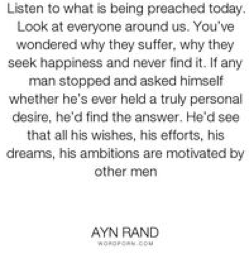 This defining characteristic of her protagonists seemed to be reflected by leaders who I admired and had changed the world for better: Mahatma Gandhi, Martin Luther King, Mother Teresa, Winston Churchill, Nelson Mandela, etc… As a society, we often paint these figures as individuals of unscrupulous morals and actions. Like with any of our heroes, we tend to glorify them and lift them to a platform we aspire to but can never reach (a topic for another blog post). There is a beautiful simplicity in defining a human by one set of uncompromised principles which can explain all their actions. In addition to these leaders, I came to idolise characters like Howard Roark and Hank Rearden for their stoicism and purity. This was the seduction of a ‘Randian’ world and I was captivated.

Stuck in the Real world

It was against this backdrop that I wanted to ‘live by my principles’. Standing by my principles in all actions, remaining strong in the face of temptation and in the end prevailing! Alas, I quickly found I was betraying my principles and compromising short-term desires or internal pressures. Two short examples:

It was quickly evident that despite my best attempts, I was a hypocrite. Professing one set of principles and then acting against them. It’s a realisation I struggled with and in some sense, continue to do so.

However reading further into the lives of great leaders helped reconcile ‘living by your principles’ and also failing to always do so. As complex characters, some of their actions were also incongruous with their principles. Gandhi fought for ‘equality for all’ yet in South Africa refused to help black people gain rights from the British and felt a superiority (a very long but good Gandhi biography found here). Churchill often pronounced all men as equal and said in 1937, ‘I do not admit… that a great wrong has been done to the Red Indians of America, or the black people of Australia… by the fact that a stronger race, a higher grade race… has come in and taken its place.’ These leaders were also hypocrites. What made them outstanding was that as opposed to abandoning their principles and becoming disenchanted with the pursuit of being purely principled, they accepted it and continued to fight to keep to their principles as much as possible: principled hypocrites.

“Hypocrisy is unavoidable and necessary. If people were required, at all times, to live up to ideals of honesty, loyalty and compassion in order for those ideals to exist, there would be no ideals. Being a moral person is a struggle in which everyone repeatedly fails, becoming a hypocrite in each of those moments. A just and peaceful society depends on hypocrites who ultimately refused to abandon the ideals they betray” – Michael Gerson

Hypocrisy as a virtue

Society is quick to brandish someone as a hypocrite. However, I feel we often fail to distinguish between those who change their principles vs those who profess one set of principles and act against them. The former is a sign of being willing to listen and learn. Compromise can be a sign of people abandoning their principles to get what they want or alternatively a recognition that the other side has some valid reasoning.

Of late, we have seen that in the sake of remaining consistent some people will staunchly defend (political) views against all logic and rational. The US Congress is a good example where Republicans and Democrats are labelled hypocrites if they co-operate, and achieve nothing when they don’t. 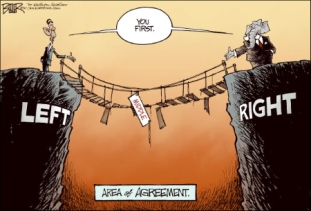 We do not live in a ‘Randian’ world, our lives and choices are complex. Hypocrisy is inevitable in our daily lives and we (or I) should be more accepting of it, in big decisions we have a greater opportunity to reflect and act on our principles. The hypocrites we should oppose are those who purport values they have no intent on keeping, not those who continue to try.

The tenant of ‘living by your principles’ still holds value as an important guide to choices and actions. In my pursuit, I falter frequently. However, hopefully, I can continue to try as ‘principled hypocrite’.

I am a great believer in hypocrisy. It’s the nearest we ever get to virtue. Its a statement of what we ought to be – spy novelist John Le Carre, A Small Town in Germany

9 thoughts on “A Principled Hypocrite”